All I knew going into Grayout was that it’s a text-based game from the POV of someone with aphasia. I was so not prepared for how emotional and visceral an experience it is. (NOTE: Review contains spoilers)

This isn’t to say that I don’t recommend Grayout. Exactly the opposite; it’s been a while since I’ve felt such a sheer physical reaction to a piece of interactive fiction. I think the last one that made me feel an actual gut reaction was My Father’s Long Long Legs, which has been acclaimed for being incredibly written as well as disturbing. But yes: If the words “medical dystopia” strike fear into your heart, proceed with caution. 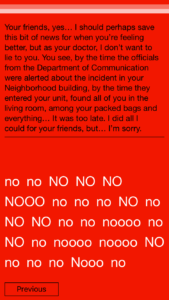 In Grayout, you play as Alaine, who wakes up in a hospital and is told she has aphasia. You soon learn that you are actually a part of a resistance movement fleeing a dystopian government, and your aphasia has actually been deliberately induced by the nightmarish Dr. Groznik. Groznik has been given free reign over his victims in an attempt to find a miracle drug that will suppress all dissent and prevent citizens from even thinking of rebellion.

The main puzzles to solve in the game are how to combine various words in a word bank to form what Alaine says aloud. It forces you to be present in the character’s every interaction, and more than that, it forces you to be a passive, captive patient, pressing ever onward while she undergoes horrific medical experiments that continually warp her mind. 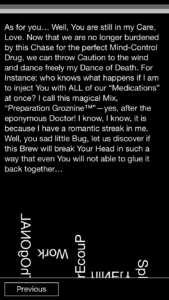 Alaine’s frustration is so palpable as she tries to communicate with the people around her. The visual cues—an angry searing red when you’re writhing in pain, the squirming, wriggling words on the screen that become increasingly illegible as the drugs damage your mind—actually made me feel nauseous at certain points in the game. An added little twist is how you can combine the words into other phrases than the one that will “solve” the puzzle and unlock the next step of the story. Some of the phrases are pretty dark.

You’re forced to choose your words, discard them, re-form your thoughts deliberately. Around the correct selections are evocative words that describe not just what you want to say but what you actually feel. The words you pick in the end help you communicate, yes, but they don’t truly convey the disgust and despair that you feel at your situation.

If there’s any downfall to Grayout, it’s how cartoonish the villains are. Groznik and the malicious Nurse Eigenkamp (because, of course, you have to go Germanic when it comes to stomach-churning medical torture) are caricatures right from their loose government-sanctioned motivations to the way they talk. It’s a short game, though, and there are many other rewarding things about the experience that outweigh that one detraction.

Grayout is the prequel to another game by Neven Mrgan & James Moore called Blackbar, which apparently takes place in the same universe and examines the act of censorship. If this game is any indication, I’m looking forward to further exploring Mrgan and Moore’s dark, twisted world. Though, hopefully this time I won’t be strapped down onto a hospital bed.