Emily Is Away by Kyle Seeley takes us back to a time before #blessed and “vaguebooking,” when the ultimate expression of angst and peak humble-bragging occurred in one place: AOL Instant Messenger.

It’s a simple premise. You have a friend named Emily. You’re (probably) in love with her. Before you know it, high school is over, it’s off to college, and it’s So Long, Astoria. The only way you can stay in touch with her is, of course, AIM. It’s an instant nostalgia trip back to those awkward days that never quite leave any of us. It immediately dredges up the heartbreak and uncertainty of trying to figure things out while growing farther apart from people who used to understand you. Plus, who could forget that sound effect of your crush coming online? 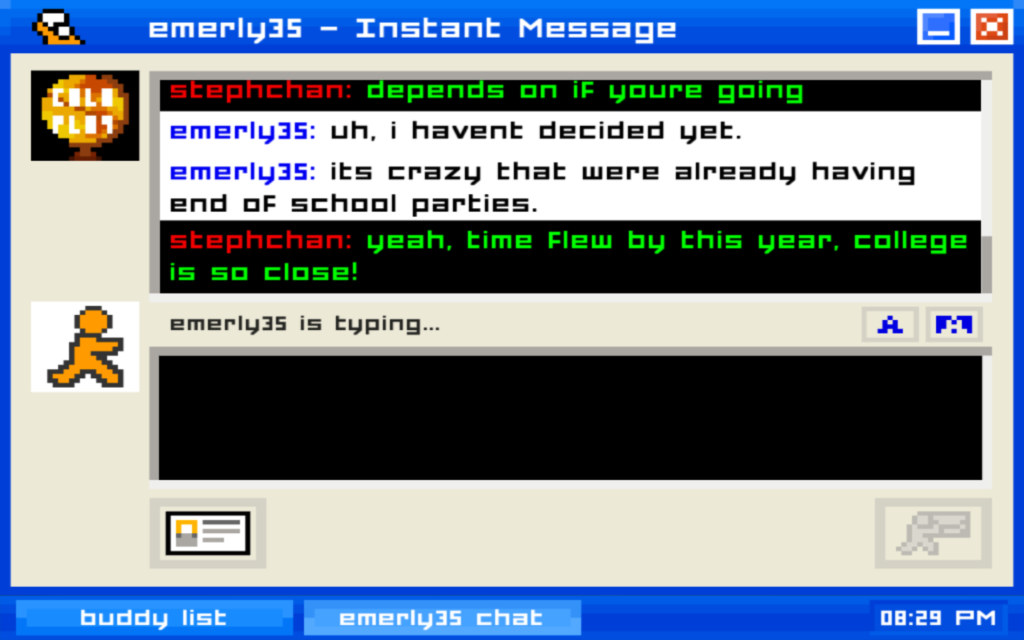 Emily Is Away mimics the old AIM interface and even forces you to “type” each of your chosen responses. You can look through different character’s profiles, which change with the passing of each year. You attempt to decipher the different snippets of song lyrics and shout-outs to friends and lovers and enemies. You read between the lines. You notice that one of them lost their father between the end of high school and beginning of college. 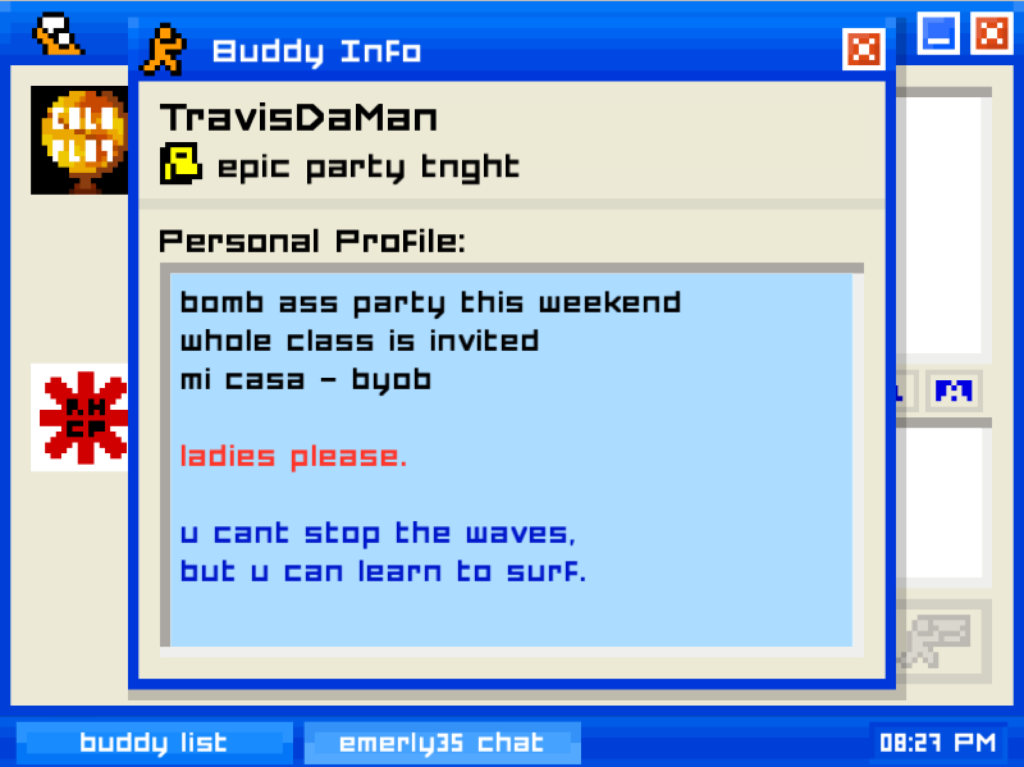 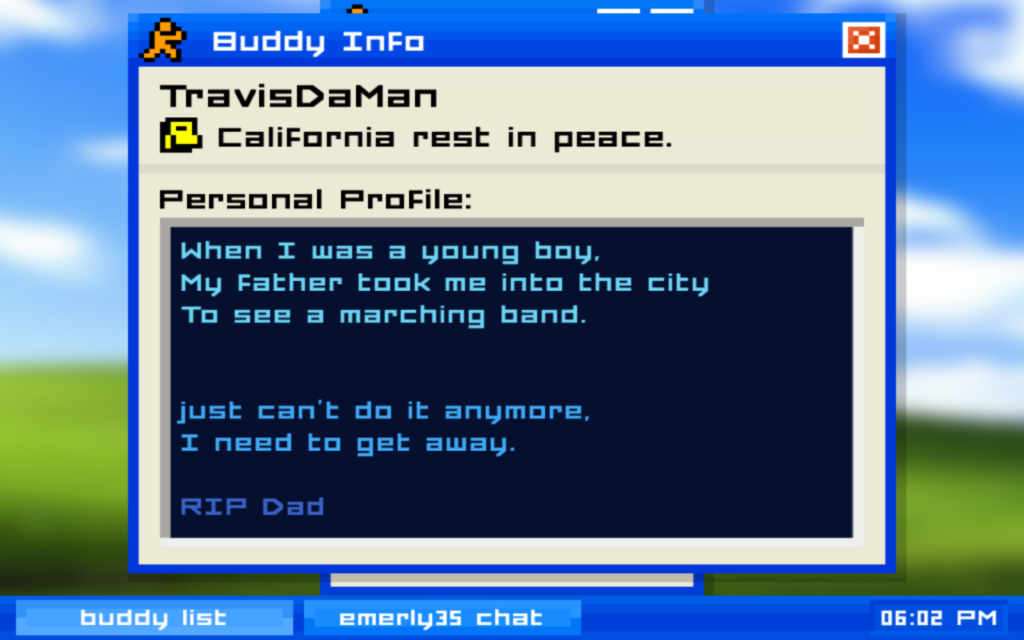 There’s a lot to love about the game, but I did feel like it had its flaws. The “typing” mechanism was jarring — after you select a response, you have to essentially keyboard-mash to force your character to type it out. It feels like a disconnect, since I wasn’t actually typing out any of those words but there they were, magically appearing on the screen. On the other hand, that mechanism leads to one of my favorite parts of the game: watching your character start to type, then delete, then replace the original, bold response with something safer, couched in a studied nonchalance.

The dialogue was a bit clunky as well, which I simultaneously loved and hated. Seeley did a great job of representing the way a teenager might talk, down to the boring details. (Another part that I loved/hated: When I chose to say “I love Coldplay!” for the sake of trying to get a different ending.) 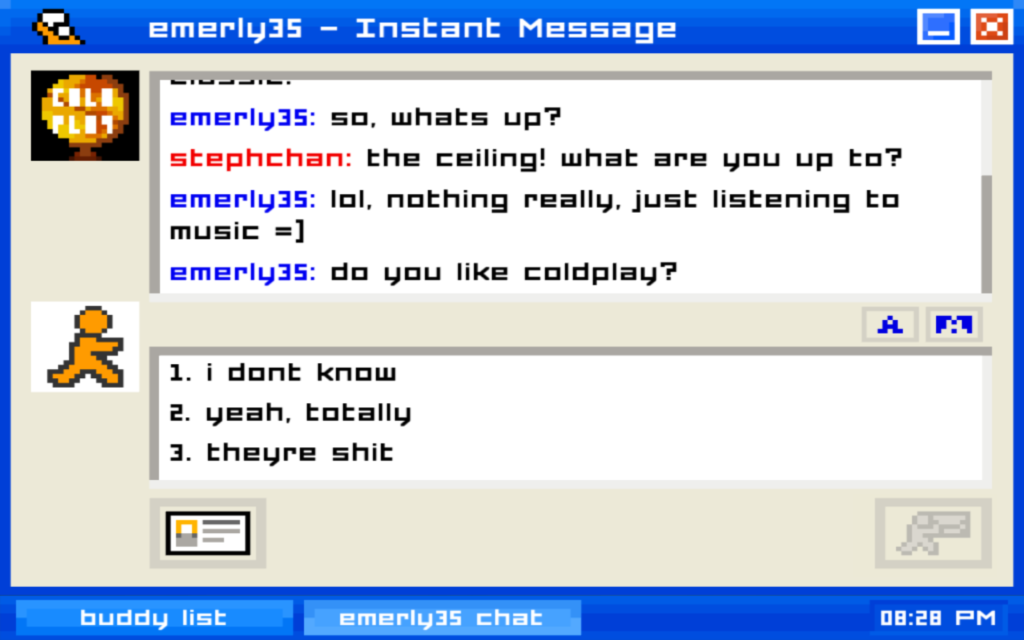 What I really appreciated about Emily Is Away is how genuine it felt. It’s easy to mock teenaged pathos because we’ve all been there and we all want to forget it ever happened. We think we’re wiser now that we’re older, but that’s just not true. Communication is hard, especially over a distance and particularly when it’s via text. 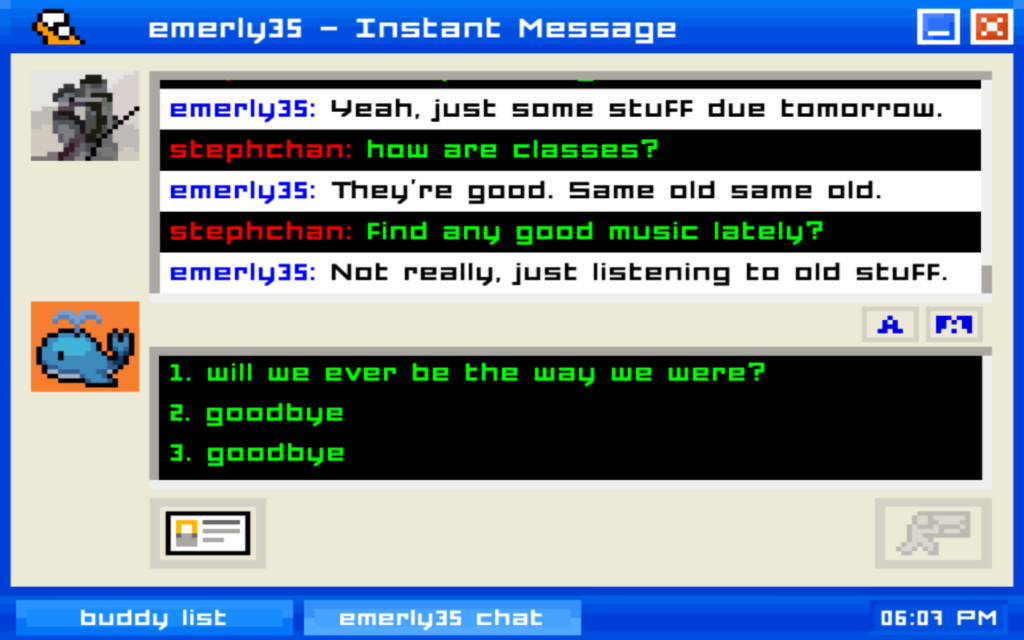 You start to write a response, agonizing over whether or not it’s the right thing to say. You hold your breath while the other person’s typing. You dread the single, lonely letter in response to whatever true thing you might have said: “k.”