The Great Palermo by We Are Muesli is a love song for anyone who’s ever gotten lost in a city and delighted in discovering its living history. (NOTE: Review contains spoilers)

The subtitle is “A Tale of Food and Transformation” and this is literal. You play as Gaetano, a boy sent to the market by his mother to fetch some eggs. Every day, you’re asked to perform the same chore, as though each experience is only a variation on a theme. And every day, you learn a little more about Palermo, the heart of Sicily, a city with 2,700 years of history. 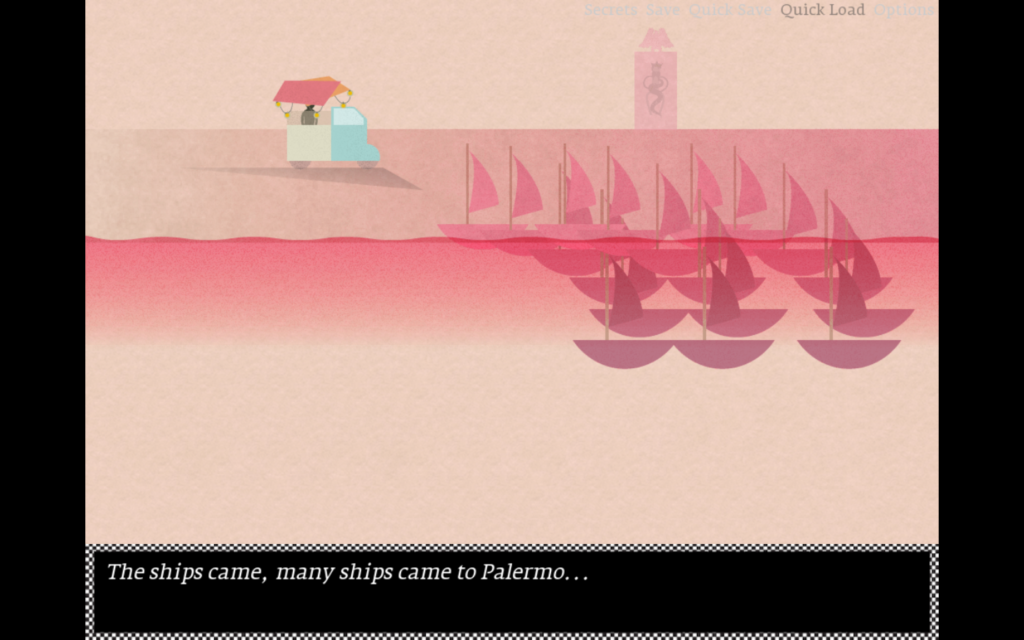 New locations open up as you wander through the side streets and alleyways, some days deciding to take a shortcut and other days deciding to revisit old locations. Each place holds its own little story. You are always welcomed by a street vendor who hands you a sumptuous treat as though it were a gift, garnished with a slice of cultural knowledge.

As you listen to each story and taste the regional specialties — perhaps a sweet and sour citron, favored at sports matches; or a sweet sfincia pastry studded with pistachios and candied orange peel — you literally transform into different cultural figures and icons. 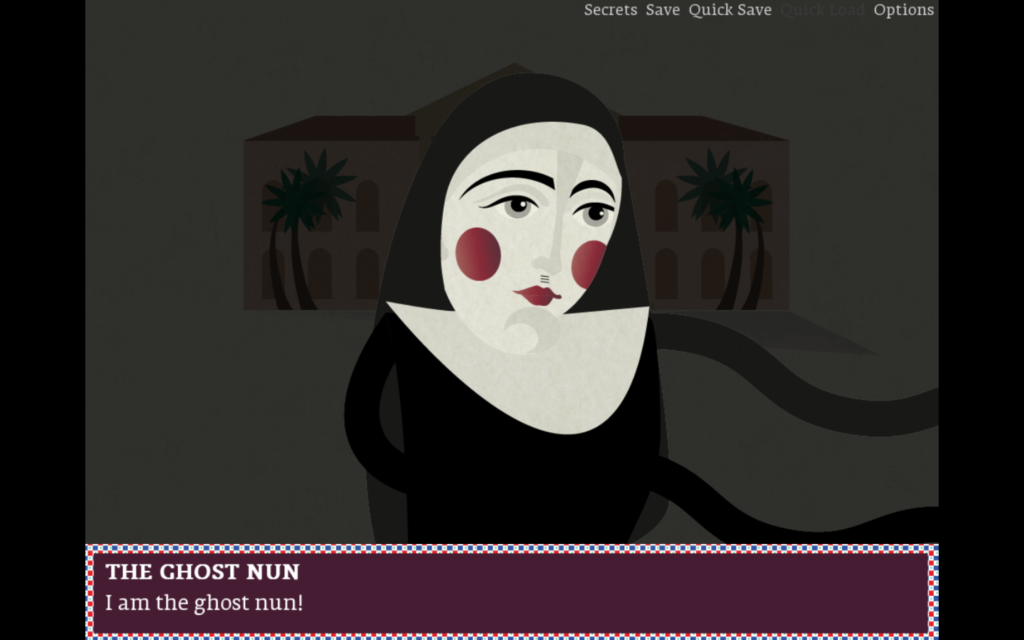 Retracing the steps of millions of people before you, you relive and become various moments in Palermo’s history. There’s the time they almost won the Coppa Italia but ultimately lost. There’s the saint whose death somehow saved the city from plague. There’s the ghost nun who haunts the halls of a monastery-turned-theater.

It’s a beautiful narrative experience with gorgeous colors and a riot of patterns and textures — and We Are Muesli knows it too. You can press ‘S’ at any time to take a screenshot. The music and narration, too, make you want to linger and learn all of The Great Palermo’s secrets. 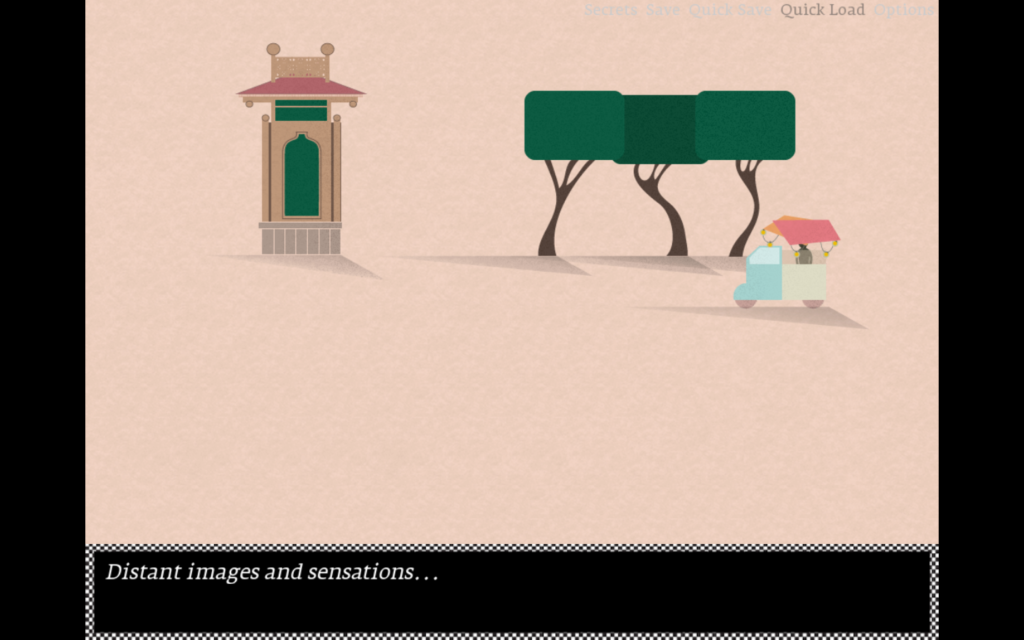 Aside from the cultural education aspects of the game, there are also more personal stories hidden between the days. There’s the somewhat ominous visitation you have with the mythical Devils of Zisa when you discover Garraffello Square. A mysterious woman waits in the marketplace for an absent lover. In one instance, you even play as Gaetano’s father, the two of you connected somehow through time and space by the shared experiences of riding the Palermo ferry and tasting Sicily’s much-famed arancini.

The Great Palermo did have a few downfalls. Its translation was less than stellar at times, though in my opinion, this was only mildly distracting. I could appreciate the intellectual meaningfulness of the repetitious gameplay, but it did feel a little tiresome at times when I was trying to test certain combinations of characters and locations to see if I could find some new information.

Most of all, I wanted more from the various characters and identities you assume. For instance, visiting the marketplace as certain characters will offer new commentary on the mysterious woman waiting at the stall. It would have been awesome to have the characters unlock additional stories or experiences at each of the other locations as well.

The Great Palermo is described as an “interactive ballad” and I find that to be very apt. It’s an interpretation of how culture and place become parts of our identity. It shows us how important culinary traditions are, making those long-ago stories seem so accessible and immediate, as though you could reach across the table and break bread with them. 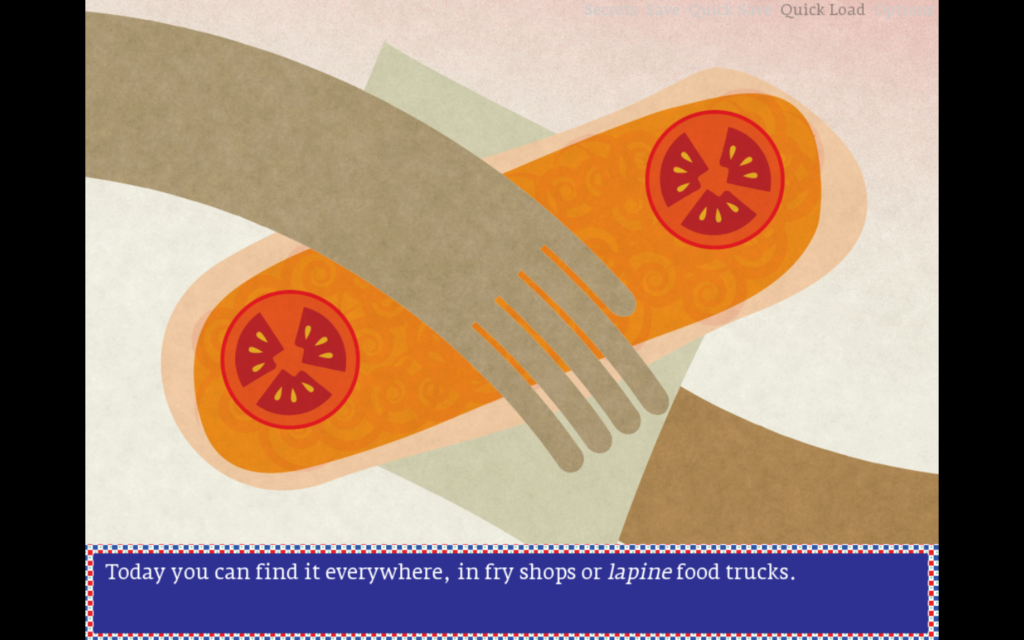